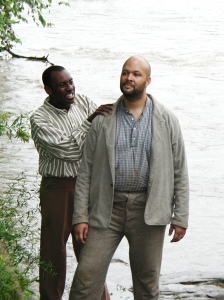 I have always been struck that the only memorial to emancipation and freedom in the Fredericksburg area is to a white man.  It is a small plaque at the home of Moncure Conway, the Southern abolitionist who riled Falmouth, Fredericksburg, and Virginia.  This is not to say Conway doesn’t merit such notice. But I do wonder if we have accorded proper credit and notice to the 10,000 or so slaves who acted with their feet months before the Emancipation Proclamation, crossing the Rappahannock to freedom at the rate of as many as 200 a day.

On Saturday, my colleague Steward Henderson and I conducted a tour for about 70 members of Shiloh Baptist Church (Old Site), Shiloh (New Site), and Mount Zion Baptist Church–all of those congregations descendant from the original African Baptist Church on Sophia Street.  Much of the day focused on sites associated with John Washington, concluding at the site of his crossing to freedom in what is today Old Mill Park. It’s a powerful site and a powerful story.

During our conversation, the idea of a memorial to The Crossing at large (symbolized by John Washington) came up.  Should we as a community, black and white, pursue such a project?  Is a memorial an appropriate way to commemorate the event?  If so, where and how?

1 thought on “A monument to freedom in Fredericksburg?”