The story is one of the cornerstones of Manassas lore and a powerful symbol of post-war reconciliation–the Manassas version of Fredericksburg’s Richard Kirkland:  John Rice of the 2d New Hampshire is hopelessly wounded near Matthew’s Hill and left for dead.  But local resident Amos Benson and his wife Margaret find him and intervene, caring for him along the roadside (without moving him) for more than week, watching him make a miraculous recovery. Once well enough, Rice is sent to Manassas and then to Richmond with other wounded Union prisoners. In 1886, this is how Rice described his experience to a reporter:

“[After being wounded], my comrades bore me off in the wake of our retreating forces toward Sudley Church, where our surgeons had established a hospital. In a short time, being closely pursued by the enemy and finding that I was apparently dead, they laid me under a fence and made their escape. Some two days after the battle I recovered consciousness but was unable to move…In this condition I was found by Amos Benson and his wife, who lived on the opposite side of Bull Run. They were returning to their home at evening, after spending the day at Sudley church….Benson, discovering life in me, brought an overworked surgeon from the church, who, however, turned away with the remark that he had no time to spend on so hopeless a case. Mrs. Benson meanwhile brought me food from her house, while her husband removed my clothing and scraped away the vermin that were praying upon me. They continued to feed and care for me till at the end of 10 days I was so far revived that the surgeons were persuaded to remove me from under he fence to more comfortable quarters in a freight car at Manassas Junction, whence in a few days I was carried to Richmond and consigned to Libby Prison.” [From the Springfield Republican, November 24, 1886]

(Harry Smelzer has a very nice post on the Benson-Rice story and the sites today.)

More than 25 years after the battle, Rice returned to the battlefield and looked up the Bensons, now living next to the abandoned cut of the Unfinished Railroad, across from Sudley Church.  They had a joyful reunion, and Rice asked if he could do anything to thank them for saving his life.  The Bensons asked for nothing, but did say that the church, much damaged during the war, still had an outstanding debt it was finding difficult to pay. Rice returned to his home in Springfield, Massachusetts and published the story in the Springfield Republican. Within days, he had collected enough money to retire the debt on the church and sent it along.  The story received national publicity.

It’s all good, and there is ample documentation to confirm the events of 1886, when Rice and Benson reunited.  But, in going through some newspaper material recently, I came across an article in the Lowell Daily Citizen from February 3, 1862. The paper noted that John Rice, recently returned from Rebel prison, was visiting the city, and “has had an eventful experience as a soldier.” The paper then went on to recite Rice’s experience in the days after the battle, presumably hearing it from Rice himself. 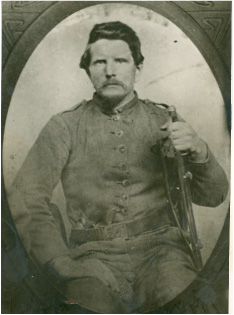 “Late in the afternoon of the Bull Run battle, he was shot through the left lung.  Three of his comrades, who remained by his side, were soon taken prisoners, and he himself carried to Sudley church, and, as this was crowded with others wounded, he was placed on the ground with many more, half of whom were dead the morning following. He remained on the ‘sacred soil,’ under the droppings of that sanctuary, for nine days, more dead than alive, before being taken to Richmond. The surgeon ordered him stimulating drinks, but his wounds were not dressed till the fetor became intolerable, and then it was first done by two fellow prisoners, each of whom had broken arms bound up in slings. Five months he passed in the Richmond hospital, being exchanged with many others early in January. His health is nearly restored, so that he proposes to serve out his term of enlistment.”

In this account, there is no mention of the Bensons, and no claim of being left under a fence by the roadside for nine days. Instead, Rice shared the far-more-typical experience of the majority of wounded found at Manassas–they were brought to hospitals rather than simply left to die. (I confess that Rice’s assertion that a surgeon rejected him as hopeless–not even bothering to have him transported–and that other surgeons agreed to care for him only after he had demonstrated he might survive has always struck me as puzzling; it’s not how physicians generally worked.)

Perhaps there is ground upon which Rice’s 1862 narrative and his 1886 version can intersect, allowing for the removal of some details later added for dramatic purposes. Perhaps Amos and Margaret Benson in fact cared for Rice at Sudley Church, rather than along the roadside.  Maybe Rice left the efforts of these Southern civilians out of his 1862 narrative because the need or desire to illuminate on the good deeds of Southerners was hardly popular at that time.

But, there is no skirting around the differences in the two narratives, and that they inevitably raise the possibility that one or the other is simply incorrect.  That in turn begs the question, did the Rice-Benson incident actually happen?

As I have said as it relates to the Kirkland legend at Fredericksburg, I feel strongly that legend has a power all its own, usually rooted in some fact. To demolish a legend requires, I think, affirmative evidence that the legend is incorrect. The 1862 newspaper article doesn’t rise to that level, but it certainly does compel us to pause and reconsider a story that to my knowledge none of us have heretofore had any cause to question.

2 thoughts on “Some bothersome source material: Is the Amos Benson-John Rice story true?”