From John Hennessy (with thanks to the Fredericksburg Area Museum for providing us with this copy of the letter): 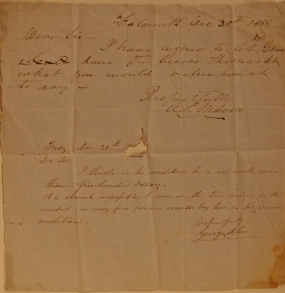 Though only a few words, and though at first blush entirely common, this is a remarkable document. It is from the collections of the Fredericksburg Area Museum–in fact it is on display in their present exhibit, “These Old Walls.”  It consists of an exchange between a 24-year-old Stafford County Doctor Augustine S. Mason and Fredericksburg’s dominant slave trader before the Civil War, George Aler (whom we have written about here).  Mason was an 1855 graduate of the University of Virginia Medical School and had been married just six weeks before he wrote this note. He would soon be a surgeon in the Confederate army. In the note he expresses his intent to sell an enslaved man named Thomas to Duff Green of Falmouth, but before doing so wants to know what Thomas is worth, and so he goes to the man who would know–Aler.

What makes this document compelling and ironic is this: Thomas himself carries it to Aler, and presumably returns the answer, which declares him to be worth “no more than 500 dollars.” Aler also asserts that there would likely be few persons willing to buy Thomas “in his present condition.”

We do not know what afflicted Thomas, and we cannot know if Thomas knew the nature of the message he carried between Mason and Aler (odds are Thomas could not read). We do not know either if the sale was ever consummated (it probably was, because the 1860 slaves census shows Mason owned five enslaved people, none of them an adult male). But we can grasp the essentials of the moment: a man subjected himself to and carried to his owner a stark assessment of the value of his own self to the white-dominated world in which he lived.

I have agreed to let D Green Scott have the bearer Thomas but what would you value him at today.

I think in his condition he is not worth more than 500 dollars.

It is almost impossible to come at the true value in the market as very few persons would by him in his present condition.

Given our many discussions here about the slave auction block in Fredericksburg, we share this, with thanks to Kevin Levin over at Civil War Memory for pointing it out. It’s a creative, powerful representation of the sort of an event that was once commonplace on the streets of Fredericksburg.

From John Hennessy (much of what follows is derived from in a short piece I did in the Journal of Fredericksburg History, published by HFFI):

The place is popularly and benignly known as the post-war home of Sue Chancellor, who, as a 14-year old, found herself and her family caught in the maelstrom of the Battle of Chancellorsville. After the war, she and her husband Vespasian Chancellor (her cousin—hence she experienced no change in her name with marriage) moved into 300 Caroline and lived there till her death in 1936.  For decades the home was widely known as the “Sue Chancellor House.”

But the house has an uncommon pedigree beyond Sue Chancellor’s residency there.  It has a brief, vivid connection to the slave trade.

In the 1830s, Mrs. Mary Berkeley Minor Blackford lived down the street with her husband William Matthews Blackford, at what is now 214 Caroline (Fredericksburg’s homes did not get fixed street addresses until the late 19th century).  Though the family would later contribute five sons to the Confederate cause, they were in fact social progressives, advocating education for slaves, colonization for freedmen and freewomen, and evincing discomfort with the institution, though they owned slaves themselves. For several years, Mrs. Blackford kept a journal, “Notes Illustrative of the Wrongs of Slavery.”  (Read an earlier post about Mary Minor Blackford here.)

In that undated journal, Blackford wrote that “there is within a few yards of our house…a tolerably large brick house owned by Judge Green,” noting that “the front and side of the building are on the street”—confirming that the house was on a corner lot. END_OF_DOCUMENT_TOKEN_TO_BE_REPLACED

The ship-to-shore fighting at Aquia Landing in late May and early June 1861 noisily raised the curtain on a new genre of literature featuring that place and other locales in the Fredericksubrg area: accounts of life within and between two contending militaries.

These wartime diaries, letters, and reports, and the postwar reminiscences that followed, overshadowed a subtler but still intriguing genre focusing on prewar life, which itself had not lacked for contention and conflict.

At one place in particular, antebellum life acquired a scenic, contemplative backdrop as it flowed along one of the the busiest corridors in Virginia:  the railroad that opened from Richmond to Fredericksburg in 1837, and in 1842 from Fredericksburg to Aquia Landing. When northbound passengers reached the railroad terminus at Aquia and transferred to steamboats for the next stage of their journey, to Washington and railroad connections to points beyond, they made a sudden transition from confining, monotonous views of scrubby woodlands bordering the tracks to broad vistas of the Potomac River. Since the eighteen-teens, Potomac steamboats had been carrying passengers to and from Alexandria, Washington, and various landings in the Fredericksburg area.

While my knowledge of the literature on antebellum Potomac life is not sufficient for me to nominate its ideal eyewitness writer, I am able to recommend, highly, at least one eyewitness illustrator. On a June day in 1853, a British artist and curator named George Wallis voyaged from Washington down the Potomac to Aquia Landing, where he would board a train that carried him through Fredericksburg to Richmond. Wallis was in the midst of what ultimately became a 5,000-mile tour, tasked by his government with evaluating American art and manufactures.

Thanks to the generosity of a descendant, part of Wallis’ portfolio today resides at the Library of Congress.

In the course his journey down the Potomac, on June 26, 1853, Wallis sketched a steamboat:

END_OF_DOCUMENT_TOKEN_TO_BE_REPLACED

It is the dark underbelly of Fredericksburg’s history: the slave trade. We know it took place here, but who, exactly, were the people in Fredericksburg trafficking in human beings? Were they an unseen underclass–pariahs? Little work has been done on them, but we do know a fair amount about three of them:  Charles Yates, one of Fredericksburg’s most powerful merchants of the 18th century, and one of its most respected citizens (for Yates’s letters related to the slave trade, click here). Walter H. Finnall took up the trade here in the 1830s; he probably bought and sold slaves more voraciously than anyone in Fredericksburg’s history.  And George Aler, who followed Finnall in the business in the 1840s, and who was the town’s major player in the slave trade at the onset of the Civil War.

We are working on Finnall, and will lay out what we find soon (some vivid and intensely interesting material). For the moment, let’s take an introductory look at George Aler.

Prior to the Civil War, Aler lived in what is today 300 Caroline Street (after the war the home of Sue and Melzi Chancellor, and so often referred to as the Sue Chancellor House). Aler was a brick-maker and ran the most successful of the three brickyards in town. He was, by most accounts, a respected member of the community. He was elected to town council in 1858, built St. Mary’s Church on Princess Anne Street, served on the board of the Fredericksburg Water Power Company, was appointed the town’s superintendent of streets, helped build the fairgrounds west of town, was a member of the Temperance Society, and even, in 1854, wrote a letter complaining about the lax enforcement of laws relating to the observance of the sabbath.

George Aler's house at 300 Caroline Street, later better known as the postwar home of the beloved Sue Chancellor--and thus most commonly referred to as "the Chancellor house."

But, from about 1848 until the Civil War, he was Fredericksburg’s dominant slave trader.

The references to him are many and ultimately require careful consideration (a task more suited to an article than a blog post), but we’ll share in raw form some of what we know.

Slave Isaac Williams remembered being purchased by Aler in the 1850s (Williams later escaped and told his story, which was then published).

I was sold to George A. Ayler of Fredericksburg, Virginia, a town situated on the Eappahannock river. Thither I was removed and kept by him in a sort of pen, where slaves and cattle were huddled promiscuously together. I was locked up at night in a little room just large enough to stand up in and kept there for nine days; then I was sold to Dr. James, a Tennessee slave dealer, who gave fifteen hundred dollars for me. (From Sunshine and Shadow of Slave Life:  Reminiscences as Told by Isaac D. Williams to “Tege” [East Saginaw, 1885], pp. 9-11)

A young girl Julia Frazier was hired or sold to Aler in the 1850s. Many years later she remembered, “Father put me to workin’ for a nigguh trader…His name was George Aler. Man cursed with every breath he took. Had a saint for a wife. He couldn’ help it; jes’ natural with him.”

Aler’s partner in his brick-making business was John W. Coleman. He too was a slave trader–indeed had been Walter Finnall’s agent in town in the 1830s.  Coleman, about whom I know little at this  point, is the common link between the two men who dominated the town’s slave trade for nearly 40 years.  (Thanks to David Ellrod of the NPS, who has uncovered a bit about Coleman.)

Aler also had a central role in the saga of Ellen Mitchell, a slave of J. Horace Lacy (of Chatham and Ellwood fame) who raised funds to buy her family’s way out of slavery. Ellen Mitchell is worth a post to herself, but Aler’s role in facilitating her fundraising is worth noting.  It’s embodied in an article that appeared in the New York Times (and elsewhere) in 1859, which you can find here.

I’ll be working on this more in the coming weeks; it’s a fascinating topic, embodied still by places that survive within our midst.