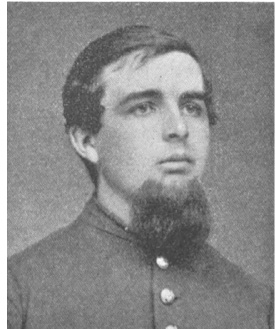 The story is one of the cornerstones of Manassas lore and a powerful symbol of post-war reconciliation–the Manassas version of Fredericksburg’s Richard Kirkland:  John Rice of the 2d New Hampshire is hopelessly wounded near Matthew’s Hill and left for dead.  But local resident Amos Benson and his wife Margaret find him and intervene, caring for him along the roadside (without moving him) for more than week, watching him make a miraculous recovery. Once well enough, Rice is sent to Manassas and then to Richmond with other wounded Union prisoners. In 1886, this is how Rice described his experience to a reporter:

“[After being wounded], my comrades bore me off in the wake of our retreating forces toward Sudley Church, where our surgeons had established a hospital. In a short time, being closely pursued by the enemy and finding that I was apparently dead, they laid me under a fence and made their escape. Some two days after the battle I recovered consciousness but was unable to move…In this condition I was found by Amos Benson and his wife, who lived on the opposite side of Bull Run. They were returning to their home at evening, after spending the day at Sudley church….Benson, discovering life in me, brought an overworked surgeon from the church, who, however, turned away with the remark that he had no time to spend on so hopeless a case. Mrs. Benson meanwhile brought me food from her house, while her husband removed my clothing and scraped away the vermin that were praying upon me. They continued to feed and care for me till at the end of 10 days I was so far revived that the surgeons were persuaded to remove me from under he fence to more comfortable quarters in a freight car at Manassas Junction, whence in a few days I was carried to Richmond and consigned to Libby Prison.” [From the Springfield Republican, November 24, 1886]

(Harry Smelzer has a very nice post on the Benson-Rice story and the sites today.)

More than 25 years after the battle, Rice returned to the battlefield and looked up the Bensons, now living next to the abandoned cut of the Unfinished Railroad, across from Sudley Church.  They had a joyful reunion, and Rice asked if he could do anything to thank them for saving his life.  The Bensons asked for nothing, but did say that the church, much damaged during the war, still had an outstanding debt it was finding difficult to pay. Rice returned to his home in Springfield, Massachusetts and published the story in the Springfield Republican. Within days, he had collected enough money to retire the debt on the church and sent it along.  The story received national publicity.

It’s all good, and there is ample documentation to confirm the events of 1886, when Rice and Benson reunited.  But, in going through some newspaper material recently, I came across an article in the Lowell Daily Citizen from February 3, 1862. END_OF_DOCUMENT_TOKEN_TO_BE_REPLACED 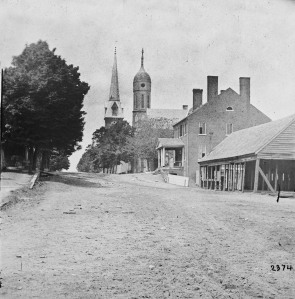 So far as we know, there are four surviving diaries of civilians that record some span of daily life in Fredericksburg during the Civil War. The best known is Jane Beale’s, which will be published anew in improved form by Historic Fredericksurg Foundation this spring. Beale was a teacher whose diary is rightly famous because of her oft-quoted account of being under fire on December 11, 1862 (though there is much more to it than that). Betty Herndon Maury’s diary has just been re-published in the latest issue of Fredericksburg History and Biography–the journal of the Central Virginia Battlefields Trust. Maury was the daughter of Matthew Fontaine Maury, an astute observer, and an eloquent Yankee-hater. Like Beale’s chronicle, Maury’s diary substantially covers only through late 1862.

Perhaps the best of all local diaries has yet to be published: the journal of Lizzie Alsop. Lizzie was the teenage daughter of Sarah and Joseph Alsop, who lived at what is today 1201 Princess Anne Street. Though she spent part of the war away at boarding school in Richmond, Lizzie’s is the most wide-ranging chronicle, offering vivid details about life under Union occupation, gossip about local residents, and even a primer in 19th century courting mores–Lizzie was the object of affection of many a Confederate officer, and left each of them wanting. She hated Yankees as passionately as she loved her nascent nation.

But there is fourth diary, little known and never published. END_OF_DOCUMENT_TOKEN_TO_BE_REPLACED