A guest post from Russ Smith, Superintendent at Fredericksburg and Spotsylvania NMP.

[ We are pleased to welcome Russ Smith to Fredericksburg Remembered. Russ has done extensive work on the Herndon Family over the last several years, and has thus encountered many things Naval in nature. He shares with us some of his observations about some of Fredericksburg’s nautical connections.]

Fredericksburg is fortunate that a wise and farsighted city government has strengthened the city’s ties to the Rappahannock River.  Like many river towns, 20th century Fredericksburg virtually turned its back on the river that once provided access to the world.  City Council has reversed that trend by embarking on projects to physically reconnect the community to the river.  As these changes take place, it is fitting to reconnect with Fredericksburg’s maritime heritage as well.

A particularly interesting epoch of that heritage took place in the mid-19th century with three Fredericksburg officers who gained national fame within years of each other.  Ironically, these naval heroes, Matthew Fontaine Maury (1806-1873), William Lewis Herndon (1813-1857), and Neil McCoul Howison (1805-1848) are most recognized for the contributions they made on dry land, rather than the sea.

It’s not surprising that young men in 19th century Fredericksburg should dream of going to sea.  Ocean-going ships may have given up on the painful slog up the Rappahannock River, but ships still made regular runs from the town to the major seaports of Baltimore and Norfolk.  Maritime activities still employed Fredericksburg residents.  The 1850 U.S. Census for Fredericksburg still listed 29 sailors, 1 Navy captain, 3 Navy lieutenants, plus 1 seaman and 1 boatman.

Young men were no doubt drawn by the romance and adventure of the sea, but there was also the potential for a young man with limited means to make his way up in the world.  The sea was a great leveler where individual skills and hard work trumped family wealth and social position.

The greatest of the Fredericksburg’s naval heroes gained both national and international fame.  Born in 1806 in Spotsylvania County, Matthew Fontaine Maury entered the Navy in 1825.  Consigned to shore duty because of extensive injuries suffered in a stagecoach accident in 1839, Maury made the study of winds and currents the focus of his career.  Based on data gathered from a host of ship’s logs, his Wind and Current Charts and Sailing Directions revolutionized navigation world-wide.   Travel was not only made safer, but many days were shaved off ocean voyages.  Unfortunately, Maury’s decision to stand by his native state during the Civil War cut short fuller contributions to the field of navigation.

Working with Maury at the Naval Observatory for a time was his brother-in-law, Lieutenant William Lewis Herndon, the son of Dabney Herndon and Elizabeth Hull Herndon.  Maury suggested that Lewis, as he was known, be chosen to lead an expedition to explore the Amazon Valley.  Explorations of this kind were a sure way to gain renown in the Navy of the time – if the explorer survived the adventure.  Leaving Lima, Peru on May 21, 1851, Herndon split his expedition in two at it reached the continental divide, with each following a separate tributary of the Amazon to the sea.  The entire journey covered 4,366 miles and resulted in two rich volumes of observations.  Congress published Herndon’s journal of his expedition in 1853.

Herndon met a tragic and heroic death while captaining the ill-fated S.S. Central America.  The gold-laden ship went down in a hurricane in 1857.  Commander Herndon was last seen on top the pilot house of the ship as it slipped beneath the waves.  He is honored by a monument at the U.S. Naval Academy and by his namesake town, Herndon, Virginia. 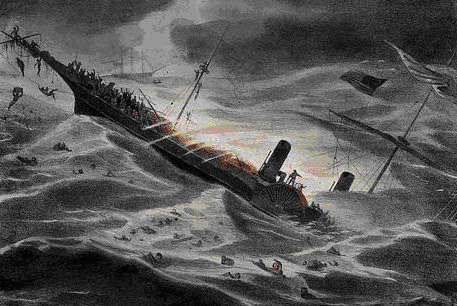 The SS Central America, the doomed ship under Herndon's command

Neil M. Howison, the son of Samuel Howison and Helen Rose Moore Howison, also gained renown through exploration.  In 1846 while in command of the schooner U.S.S. Shark, he was entrusted with a sensitive mission to the Oregon Territory, then in dispute between the United States and Great Britain.  He was to provide encouragement to U.S. settlers, and rifles if necessary.  He reached the Columbia River in July of 1847.  Fortunately, the border dispute was amicably resolved and Howison spent his time exploring the region.

On leaving Oregon, Howison had to attempt to navigate the treacherous mouth of the Columbia without a pilot.  He failed.  The Shark went down, but not a member of the crew was lost.  Howison was later exonerated of any blame.  He saved the ship’s flag and presented it to local citizens as the first American flag to fly over Oregon as U.S. territory.

Howison returned to Fredericksburg in July of 1847.  One local resident described him as “the most agreeable talker and most humorous.”  No doubt he spent his time in Fredericksburg finishing his report to Congress which was ordered to be published in 1848.  Sadly, Howison died before his report appeared, succumbing to a heart ailment in February 1848.

As Fredericksburgers once again reconnect with their river, we should remember these heroes and others who have gone to sea from this port city.  Perhaps some sort of monument or memorial to them at the new waterfront park might inspire future generations to emulate them by going forth with courage and conviction to make their mark in their chosen field.