From John Hennessy (the following is a short excerpt from the keynote address I am giving tomorrow at North Carolina State’s conference on Public History and the Civl War; we have written on this question previously here and here):

﻿Some people rebel at the idea that we, as history professoinals, engage in memorliazation. In our role as memorialists, haven’t public historians been wrong all these years—party to a destructively positive view of the Civil War and American history–one that has achieved reconciliation at the expense of good history and historical justice? 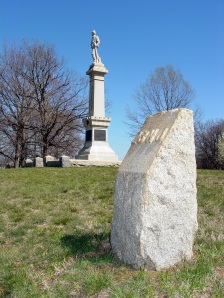 For those of you who think we have, I’d aver we must humble ourselves. Public history and public historians invariably reflect society; we don’t lead it. We are not making society more diverse. We did not initiate the Civil Rights or Women’s Labor movements. Nor did public historians assert the primacy of reconciliation above good history 100 years ago. But we have reflected all these things faithfully in their time. When the nation (assuredly a white-themed nation) demanded it, we emphasized themes of shared sacrifice, courage, and reconciliation—and until the 1980s we gave little thought to the idea that something might be amiss. Today we engage in a more diverse history because our society is more diverse. We will continue to evolve over time. The public asks questions or makes demands, scholarship blazes a trail, and we facilitate understanding and, hopefully, meaning.

So, we need feel no self consciousness about our historic role as memorialists—and nor should we feel self-consciousness in our continued role as memorialists—though our commemorative role sometimes annoys and offends some in adacemia, and even some within the public. That we are bound by tradition or conditions explicit or implied…or influenced by the ardor of participants or their descendants…is not unique. In fact, it’s almost universal within our industry. Do you not think public historians at LBJ didn’t ponder, “What would Lady Bird say?” Or at Selma to Montgomery, John Lewis and other Civil Rights veterans don’t influence how the story is told at the Edmund Pettus Bridge? Has interpretation at Little Big Horn been affected by the emerging voice of Indians’ descendants? What about Rosie the Riveter, Alcatraz, or Manzanar? Do you think the King family has had a little bit of influence in the presentation and public perception of Martin Luther King Jr. National Historic Site?

These forces are part of the public historians’ world. Our challenge is not to resist them, but to understand them. And more importantly to help our visitors understand them.

3 thoughts on “Our role as memorialsts: no self-consciousness required, only awareness”