NOTE: I have assembled the steeple panoramas into a single image . It’s a 22mb file–that is to say, large–but I’ve loaded it here if you wish to explore it on your own. We’ll occasionally take a look at this image in the coming month or so, seeing what it can tell us about Fredericksburg’s 19th-century landscape.

In 1888 a photographer mounted the steeple of St. George’s Episcopal Church on Princess Anne Street and took a series of eleven panoramic images of Fredericksburg, spanning the compass. The panorama isn’t perfect–there are gaps–but it is as thorough a documentation of any Virginia town as exists from that period. Explored deeply, the panoramas are a gold mine, revealing a number of buildings since lost,  a town still recovering from war, and a utilitarian landscape that has largely disappeared.

Today we’ll look at the intersection of Caroline and William–the very heart of downtown Fredericksburg. This is one place where the panoramic images match nicely, and I haev put them together here.

Two things emerge from this image. First, prominent in the middle of the image is the only known photograph of the home of Dr. John H. Wallace.  The house in this view was built just after the Civil War to replace the home badly damaged during the war–one that appears in a famous sketch done of the looting of town (below) 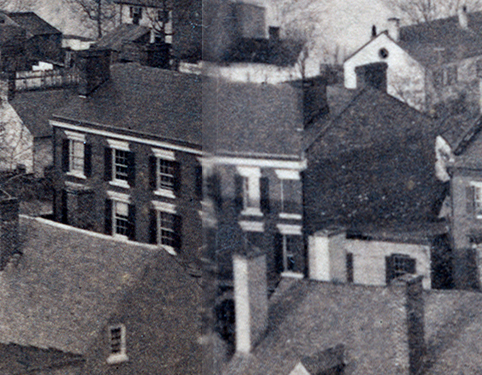 Pardon the distortion–the house sits at the junction of two of the images.

Wallace was one of a half-dozen prominent doctors in Fredericksburg in 1860, and like many of them dabbled in other ventures as well (he served as the President of the Farmer’s Bank on Princess Anne Street). His family was large and influential–indeed, his son Wistar would largely be responsible for the creation of what we now know as the Central Rappahannock Regional Library. Dr. John Wallace also owned “Liberty Hall,” a farm of more than 500 acres along Potomac Creek north of Truslow Road in Stafford County (north of Ellerslie, another Wallace place that still stands).

To the right of Wallace’s house, three of four lots have newly constructed buildings.

To the left, across William Street, the site of the Bank of Virginia (burned December 11) still stands empty 25 years later. Moving farther north (just above Hall’s Drug Store), the entire first half of the block was destroyed, and most of those lots still appear vacant.

The 1000 block of Caroline–parts of it still unreconstructed in 1888.

During the battle, Dr. Wallace and those parts of his family not in the Confederate army had refugeed. Family tradition holds that Dr. Wallace’s house survived by the efforts of a slave, Fielding Grant. The family found the house surrounded by the burnt remnants of neighbors’ homes, with many of the Wallace family belongings looted or destroyed. This image shows the looting on the street in front of the battered house on December 11, 1862. Noel has written about that here. 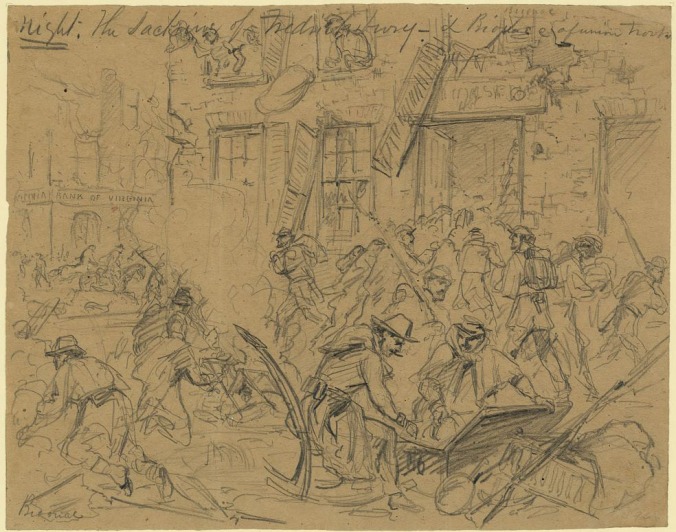 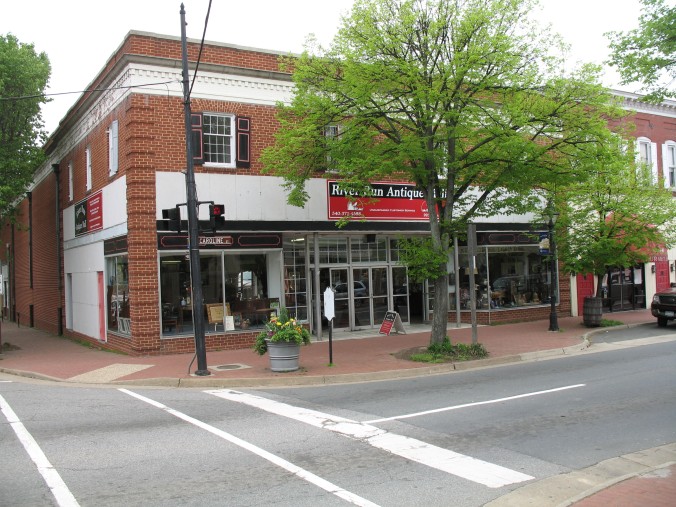 The Wallace house site today. This building was in the 1960s W.T. Grant five and dime–the scene of sit-ins in 1960, but more on that in another post.

In our next, we’ll look at another lost building or two, plus the great visual documentation of backyards and back alleys the panorama offers.

25 thoughts on “An umnatched visual record: the 1888 steeple shots reveal some of Fredericksburg’s lost buildings”