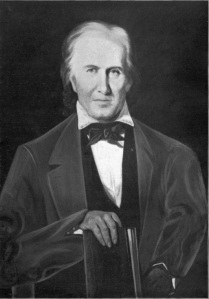 Exactly 150 years ago today, the people of Fredericksburg went to the polls to ratify (or–theoretically–not) the ordinance of secession. In Fredericksburg, the vote took place at the courthouse on Princess Anne Street. While some greeted the day with joy or simply saw the vote as confirmation of a foregone conclusion, for many the vote represented profound moment. In Fredericksburg, perhaps the most dramatic moment came when one of the town’s pre-eminent citizens, Judge John Tayloe Lomax, arrived at the Circuit Courthouse, over which he had presided for 27 years (he retired in 1857). Lomax was born in Caroline County, but became a mainstay of Fredericksburg society as the judge of Virginia’s 5th Circuit Court in Fredericksburg. He was for many years on the faculty of the law school at the University of Virginia, where he schooled at least three men who would become central to secession and the aspiring Confederacy–R.M.T. Hunter, Robert Toombs of Georgia, and Alexander H.H. Stuart. When not sitting on the bench or traveling to Charlottesville, Lomax operated a small law school in town. His prodigies included men who became some of the town’s most visible secessionists:  William S. Barton, John L. Marye, Jr., William A. Little, and Dabney Maury. 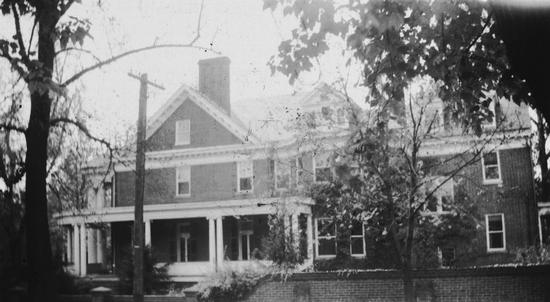 The Lomax house still stands at the corner of Hanover and Prince Edward Streets. It was heavily Victorianized after the Civil War. 1930s photo by the WPA.

By May 1861, the 80-year-old Lomax was “enfeebled by recent sickness,” and his appearance at the polls seemed to embody the determination and moral force of the Confederate cause as Virginians saw it. “With tottering steps, supported by friends,” the judge made his way up the courthouse steps. Sensing the expectations of others and inclined to a “rhetorical style and the cultivation of the graces of oratory,” Lomax paused to speak.  The assemblage (which otherwise had been quite raucous, as we shall see in part 2 of this post) went silent. “It was a scene calculated to produce a deep impression,” reported the Fredericksburg News. Lomax,  his voice feeble from both “weakness and emotion,” brought many to tears, and captured clearly the profound dilemma that faced thoughtful people across the South.

The Circuit Courthouse on Princess Anne Street, where Judge Lomax struggled up the steps to cast his vote for secession on May 23, 1861.

Lomax proclaimed that he had long hoped that this day would never come, but that “the awful question is now presented to the people of Virginia whether she will continue her allegiance to the fragmentary consideration of the North, now practically changed by traitors and party and sectional politicians into a conspiracy against the liberty and rights of Virginia and the South.”  Despite the likelihood that the North would soon “pour down upon” the South “a desolation such as the world has seldom ever witnessed,” he said, there could be little doubt of the proper course.

O! how can I with duty which I owe to this beloved and honored Commonwealth, vote her continued allegiance to this baleful dominion? Our Union and Constitution have been my delight and the object of my affection….Now I come to perform in my old age, the most distressed duty of my whole life: to vote her end, to vote her entire separation from the dominion of what remains of the Federal United States of America.  With Christian faith I will trust in Divine Providence to overrule her destinies, to the change which is now to take place and whatever change may be to brighten her destiny with the beams of Divine favor and to [put] our people in the path of righteousness to their safety and peace and to the Divine glory. I must, I must, in deepest convictions of duty, vote my dear old State out and to secure separation form the United States, I must vote for the ratification of the Ordinance for that separation.

Lomax died in October 1862, just two months before the “desolation” he had prophesied visited his town in its most brutal form.

Up next we will look at the secession vote in Fredericksburg–fraught with voter intimidation–which constituted “democracy” in a form never before seen by the town.