From John Hennessy (writing on Manassas for the first time in this forum):

Over the last fifteen years or so, my forays back into Manassas-related topics have always been unadventurous, relying almost entirely on things I uncovered and learned years ago rather than trying to hunt up (or even keep track of) new material. In the last week, though, I have had occasion to do some work in preparation for the tour I’ll be giving at Manassas this coming Friday as part of the 150th there–a look and walk through of the community of Sudley and its experience during and after First Manassas. This demanded that I not only revisit the material I’d accumulated way back when (it’s hard for me to admit that anything meaningful in my life could have happened nearly thirty years ago, hence the vagary), but also dig into what has become available since then. I’ve learned a good deal, some of it thanks to the seminal work of others.

Above is an image you and I have probably seen a thousand times, but never really took in closely. It shows four children sitting along Catharpin Run at Sudley Springs Ford, with seven Union cavalarymen looming on the far bank. Taken in March 1862, if there is an image that better serves as a metaphor for most white Virginians’ perception of the Civil War in its early months, I haven’t seen it: children facing down looming disaster in the form of Union soldiers.

We’ll write about the children visible in this image (for some of them appear in others taken the same day), but suffice to say that it’s virtually certain that these are the four children of John and Martha Thornberry, who lived just up the hill from the ford. Their ages and gender match what we know about the Thornberry family, and there was no other collection of offspring that matched in the Sudley Area:  Samuel was 12 in 1860; his brother Joseph, 7, stands next to him; that’s likely toddler Annetta with her hand on her forehead, and at the left is Laura, 5. Laura would later in life write a brief memoir about her family’s experience during the war.

Opposite them on the far bank of Catharpin Run are seven Union cavalrymen standing next to the spring house that marked (and whose rubble still marks) Sudley Springs. It was here that nearly one-third of  the Union army crossed Catharpin Run on its way to battle on July 21, 1861 (and where we will be doing a tour this Friday night at 6 p.m., as part of the Manassas 150th activities). 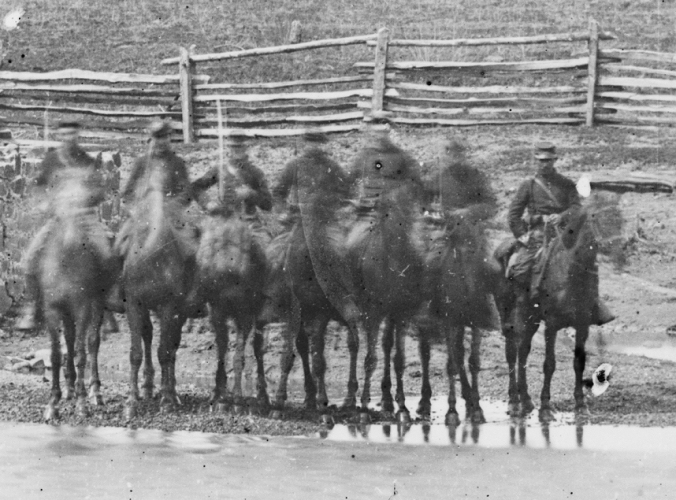 They’re not being nearly still enough to satisfy the photographer, George Barnard, for all are blurred in the image except the man at the far right. Still, there is enough detail to see that one of the soldiers has his sabre drawn, perched menacingly on his shoulder.

This is one of a series of images taken in and around Sudley Springs on that March day in 1862. We’ll look at the rest of them in coming posts.

Let me recommend to you strongly Garry Adelman’s new book, Manassas Battlefields Then and Now, which identifies for the first time many long-known-but-little understood photographs of the Manassas battlefields. It’s a rare thing when virtually everyone who knows something about Manassas (or anything else) agrees an author gets most everything right, but in this case it is so. Garry did a terrific job. You can order it here.